1992 saw a new faction enter the LEGO castle world; while others had been obsessed with fighting and glory, these guys had only one wish ‘Money’. An official LEGO source of the time described them as "a feared group of renegades. They won't let anything or anyone stop their quest for riches.”


The Wolfpack (also known as Wolf People by some) were the bandit faction, destined to be the underdog in any fight, and despite only having three sets of their own they stood up and tweaked the noses of both the Black Knights and the Dragon Masters (in sets 6086 and 6082 respectively). Indeed the below video shows just how daring they could be.

(On a side note, it was this advert and ones just like it that really made me fall in love with LEGO, such genius.)

Though similar to the Forestmen that came before them; these guys were not quite so noble, they were less clean cut and shiftier looking (the stubble and eye patch really made them look villainous).  They also had hoods instead of cloth caps and were surprisingly organised enough to give each member a coat of arms (a wolf symbol on their torsos).

They were also far fewer in number and as such had less equipment, troops and fortifications (one small castle and one cart was all the received). They clearly had an effect on the LEGO psyche though because they saw a weird reincarnation in 2001 as an odd combination of Bull Knight and key ring. 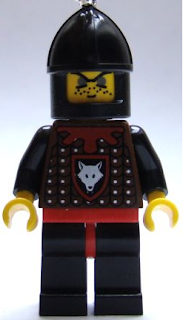 It should also be noted that when the Wolfpack were released every other faction was still available, so a collector could have these guys as well as Forestmen; this diversity in the early sets made the Castle series so popular, it felt like an ever expanding world. 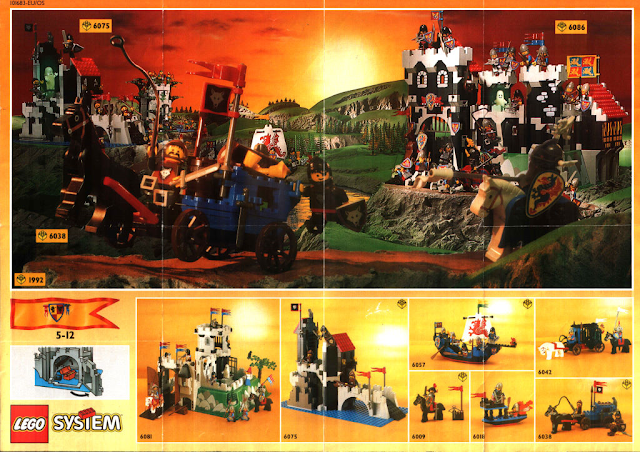 (As you can see in the poster the Forsetmen’s Fortress is pictured just behind the Wolfpacks Tower, something sadly missing from modern LEGO Castle sets; just image Kingdom commenting on Castle) 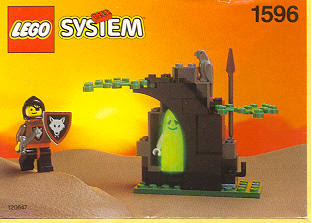 This is a surprisingly nice little set; the basic idea behind it is for a ghost to be able to magically appear out of the rock. The set is a small tree (black just like the Forestmen’s) with a rock formation next to it; it features a sliding surface to place the ghost upon so that it can be moved (see the instructions below if still confused). I really like that play feature, it’s nice to have a practical set that makes use of its figs (the ghost) rather than just including them arbitrarily. Also the fact that the Wolfpack fig comes with a sword, shield, spear and cape is extremely nice, as is the inclusion of the grey bird (it should be noted that the grey bird is seen in every Wolfpack set, I see it as some type of mascot). Overall it is a nice little play set and one in which I approve the inclusion of a ghost. 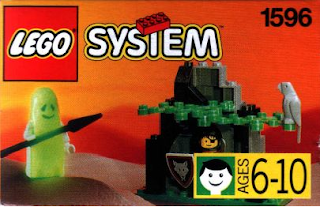 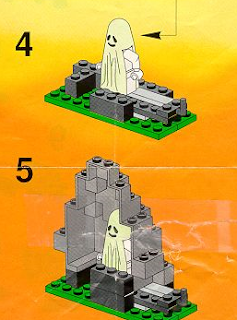 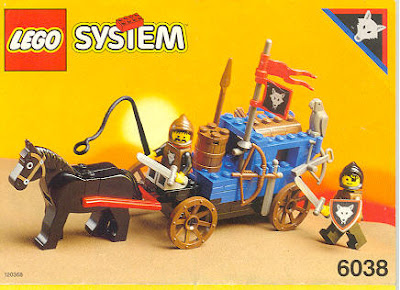 Don’t panic my fellow wolves, the supply wagon has arrived and it is mightily stocked. Yes the Wolfpack see their forces grow strong with a set like this, a nice sturdy wagon design (with a secret compartment), the only horse they ever receive, a chest of gold to fund their criminal activity and enough weapons to make a quartermaster sigh (and a barrel full of whatever your imagination can think of; mine is filled with Rum). It’s nice to see a simple idea done so well, there is enough equipment in this set to make it an instant army builder, my only problem with the set is the fact that the wagon is a hard to turn, there is little manoeuvrability in the front wheels, but I suppose that wagons from our own history were not the most agile of constructions anyway, so historically its probably accurate. Truly I can not find a reason not to love this set, my biggest problem I have with it is the fact that I only own one (I will happily take donations). 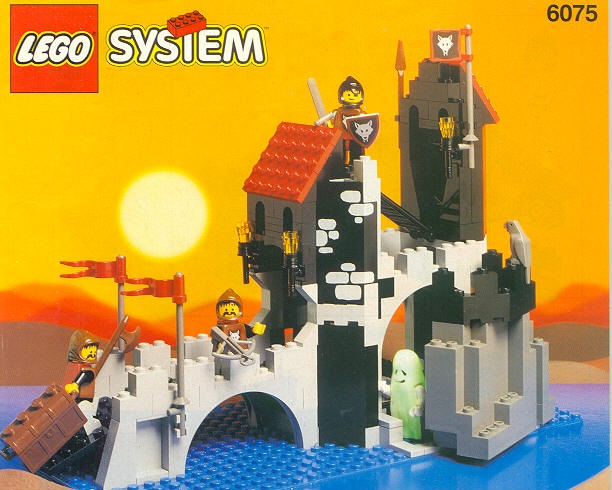 This is the only structure ever released for the Wolfpack and it’s rather a small dingy thing. Built on water baseplate the sets introduces itself with a long walk across a bridge up to a rather foreboding front entrance, from there you are lead to a bottom floor covered in water (however that’s a good enough place to leave their treasure), and from this murky basement a ladder leads up to a haunted tower with nothing inside it but a ghost, no wonder the Wolfpack only stuck around for such a short time.

Despite this rather poor introduction, the set is really nice; it has a haunted castle vibe to it and is very different from anything that had come previously the red slanted roofs contrast well with the black walls and the blue water and grey bridge complete the ensemble perfectly; and it should be said that the design on the front is a thing of beauty. 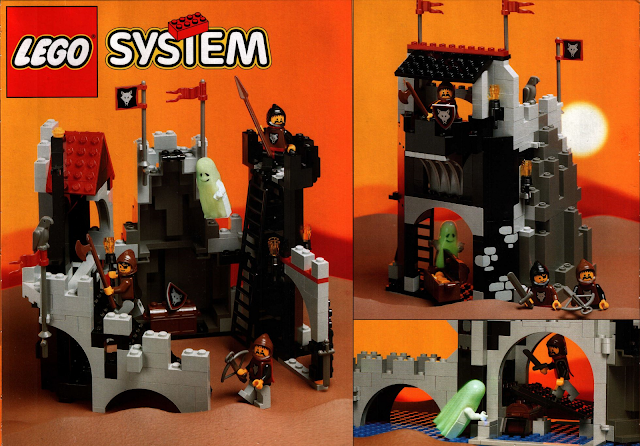 I should be noted that the Wolfpack in this tower are really in need of their wagon riding brothers as they are actually less well equipped than them (which is surprising for such a difference in set sizes). This set was also the very first LEGO set to include BURPs (talk about progress). 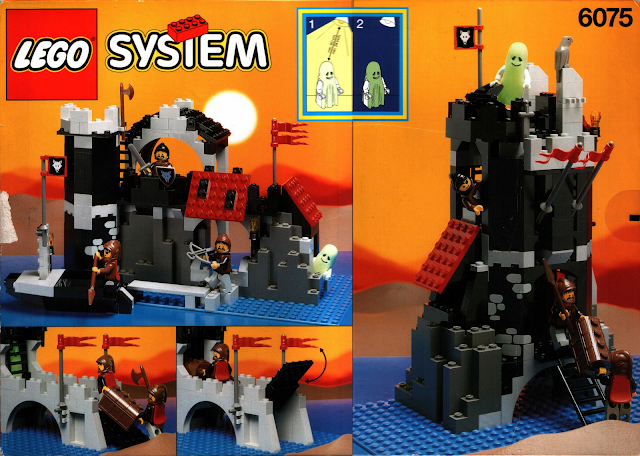 That is it! Three was all that the Wolfpack were allowed, apart from a couple of single figure appearances in a few Dragon Master sets these guys only appeared as a tiny faction for only two years. Amazingly they are still well remembered today.

I believe it is due to their richness of character and the quality of their sets, a faction a few years later tried to follow very similarly to the Wolfpack (the Bull Knights) yet never achieved anything as close to their greatness despite a much larger number of sets and all the advantages future LEGO design could bring.

I much prefer a faction to release a few perfect sets and then leave me wanting more than constantly churn out a large number of mediocre or poor sets that make me wish LEGO would try something new.

The Wolpack proved that it is better to burn out rather than fade away. 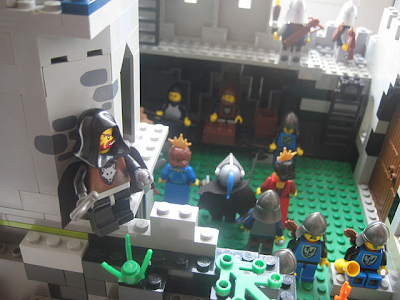 To see some of my own creation's using Wolfpack, click on the following links,
Last of the Wolfpack
Wolfpack and Falcon Moc

As always, Thank you for reading, next on my list Dragon Masters.
Posted by LegoSteve at 21:30