1987 brought about the third faction to be released by TLC, these sets featured an entirely new design and style, whilst the previous factions had focused on Knights, Castles and everything that accompanied them (metal helms, barding and catapults for example). These Forestmen where more akin to the legend of Robin Hood; gone were the steel helms and armor plates, only to be replaced with soft cloth caps, peasants garb and a particular fondness for greenery and blackened trees.

Some countries did not actually receive the joy of these sets until 1988 but the Camouflaged outpost was available in most European countries in 1987 (the year of my birth, a good year indeed).

Following the true Robin Hood vibe, these Forestmen remained almost painfully clichéd throughout there existence, they lived in the forest, the fought the establishment (in the form of the Crusaders, sets 6077 and 6042 are good examples of this) and they remained on relatively good terms with the locals (set no. 1975).

It should be noted that sets are of a very high quality; however the one biggest flaw of all these sets is the odd design decision to use black bricks for trees, rather than the more conventional brown, it has never bother me (I almost think I prefer it) so it will not be mentioned again in this article, however you are perfectly in your rights to chastise me for my Forestman Favouritism.

One strange piece of trivia is that the Forestmen where never given axes or crossbows (which was unlike every other faction), so sadly they had to make do with spears and bows (and swords, obviously), resources were scarce in the forest and I like the decision by TLC to show that. However they did receive an abundance of feathers, so even if they were poorly equipped they looked pretty. 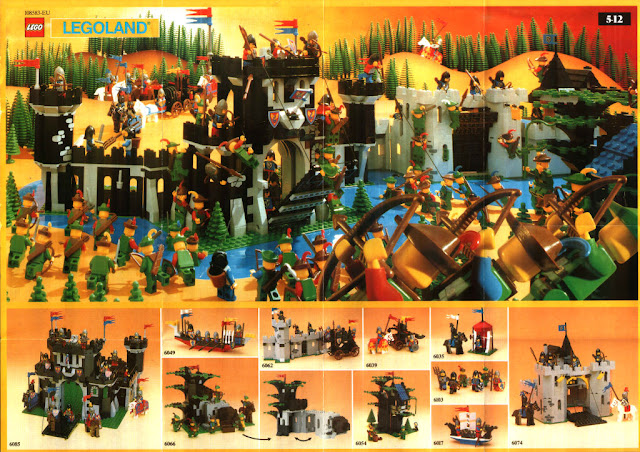 In the above poster we see the Forestmen launch a major offensive upon a combined fortification of Black Knights and Black Falcon’s, you may notice in the bottom left side of the picture there is a civilian very close to the action; proof again that the Forestmen were friendly with peasants. 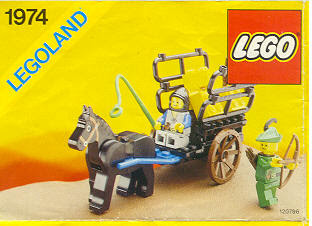 Here we see in this set a small piece of civilian life: the peasant is taking his hay to market and due to the fact that he and the Forestman are such good friends, he has offered to smuggle him past the castle gates. You can tell that there is no conflict in this set due to the fact that the Forestman is kindly pointing his bow away from the cart and the fact the set is called ‘Smugglers Hayride’. I really like this set, it helps build you civilian collection (something I love), we get the rare black feather wheel, and in my opinion an extra Forestman is always welcome. One criticism would be that the cart is a little ugly (too black for me) and that the guy has a green whip (vine) which is a little odd, however those are small complaints placed poorly on a good set.
Set Name = Crusader’s Cart 1680 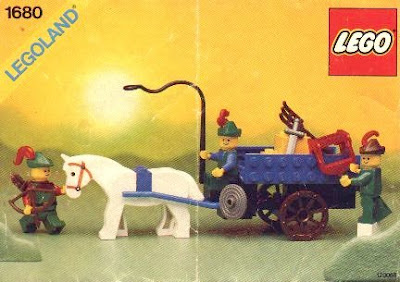 This set has a better cart than the previous and we get far better equipment, however I prefer the smugglers hayride than this, I really miss the peasant, I can see that this set is better I just prefer the other one. Supplies in this set are good; however I feel that one fig will miss out somewhat, one man gets the bow, one gets the sword and shield, whilst the other has to choose between a black whip or a pitchfork (please note the pitchfork in this set was crazy rare, until the Kingdoms Village Mill Raid set of 2011). True complaints for the set are the lack of feathers (we only get one wheel) and the fact that the shield would be better as the printed stag version rather than what we get. As a Forestmen army builder, you can't ask for better. 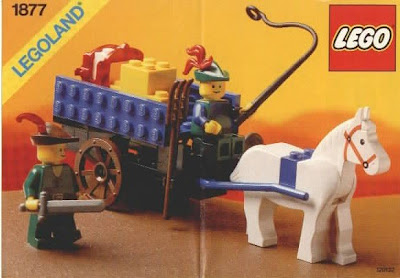 This set is exactly the same as the above one; however it was released as part of a value pack and sadly was missing one of the figs. 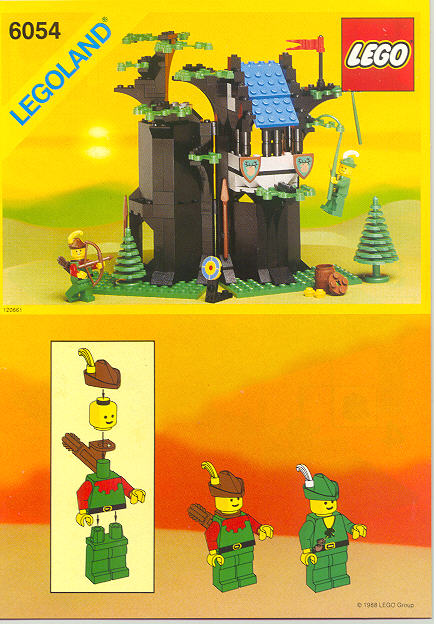 This set is one of the examples as to why this faction is looked back on with such fondness. A little tree house for two Forestmen to camp out in whilst planning there next attack on the Crusaders; included are such wonders as a small barrel of gold, an archery butt and enough vines and trees for you Forestmen to climb up (and hide behind) for days on end. This set is also the only set to feature a white feather for the Forestmen, as this particular combination is unique it has been rumoured that the white feathered man as actually the leader (Robin Hood himself), however this is totally unconfirmed. I loved this set, however the black tree is extremely unattractive and the actual building elements (the blue roof and grey walls) make it hard to imagine this is a ‘Hideout’, as it would be spotted from miles away in a forest; just image a Crusader patrol in the forest “hey guys should we check out the black tree with the blue roof over there?”, so I always saw it as a lookout post, a nice corner stone of any rebel army. 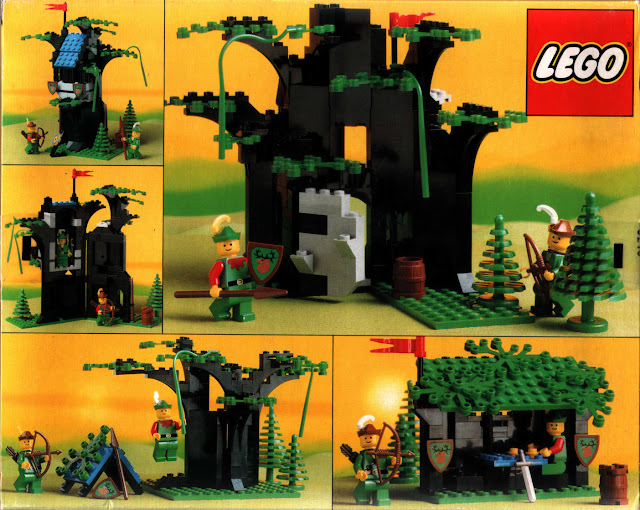 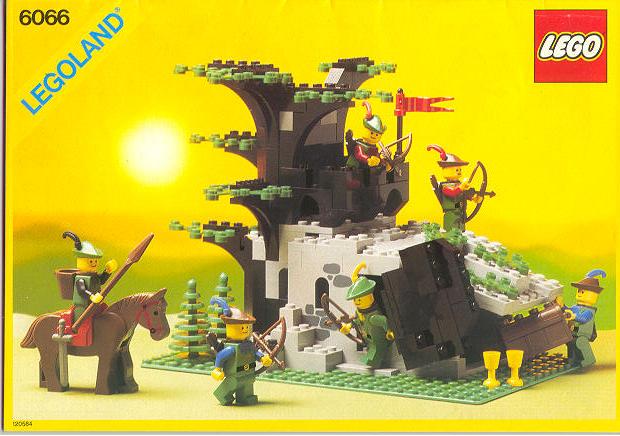 Now it’s weird, but I always felt this set was the hideout and the previous one was the outpost, I have often noted that LEGO missteps occasionally when it comes to naming their sets and to me, this is another example (Camouflaged Hideout works better in my mind). As an outpost I must say that the poor Forestmen suffer a degree of discomfort as they are literally living in the ruins of an older structure (or a cave), that being said, it is an excellent place for them to sort there ill gotten gains and hide from the greater numbers of Crusaders chasing them. Coming with a generous number of figs (six in total) I loved the fact that five of them were equipped with bows and quivers, it made them feel like true forest dwellers rather than just a detachment of troops; included in their numbers was the rare black clothed Forestman (who I always used as Robin) who only came in this set and 6071. It’s a nice albeit odd little set, it doesn’t look wonderful but it adds tremendous play value to any collection, what I enjoyed most about it was the fact that it could easily be built upon and adapted as it never looked beautiful in the first place. 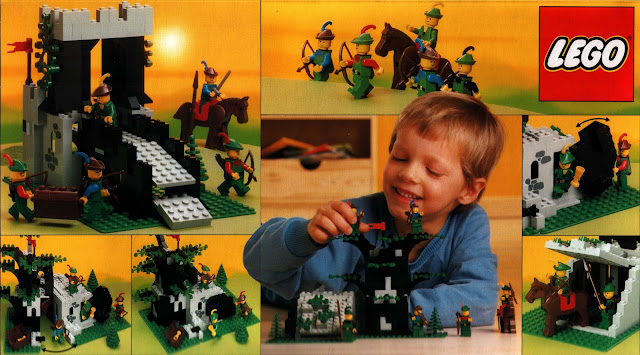 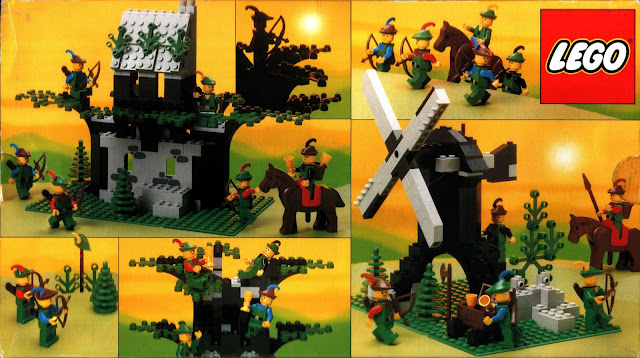 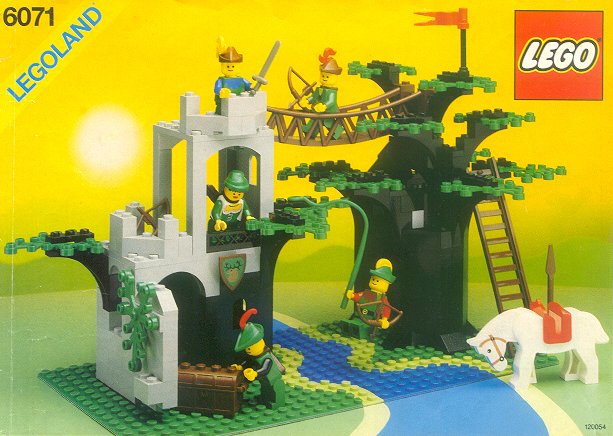 What the outpost lacked in beauty is easily made up for by this, the Forestmen’s Crossing, and this was for me the most beautiful castle set during the early years of LEGO. I will take you back to the times, we had blue and red soldiers hiding out in there grey castles (with some nice flashes of yellow included for the Falcon’s), next to those castles we have some small civilian sets (the red inn was a highlight) but the halfway between both clusters of civilisation we have this. Picture that in your mind if you can. It was beautiful, it gave my small five or six year old mind no end of joy, this type of set connects the world together, I used to have all my sets built and sprawled out upon my carpet, the crossing was always a good halfway point between larger warring factions; ahhh, good times. As for the set itself, I can’t really fault it, a great number and variety of figs (including a unique Forestwoman, who I always used as Maid Marian), a really nice set design and a good collection of extras (three bows and quivers!). This is my favourite Forestman set, sadly it was only available in the US so most of the world was really missing out with this one. 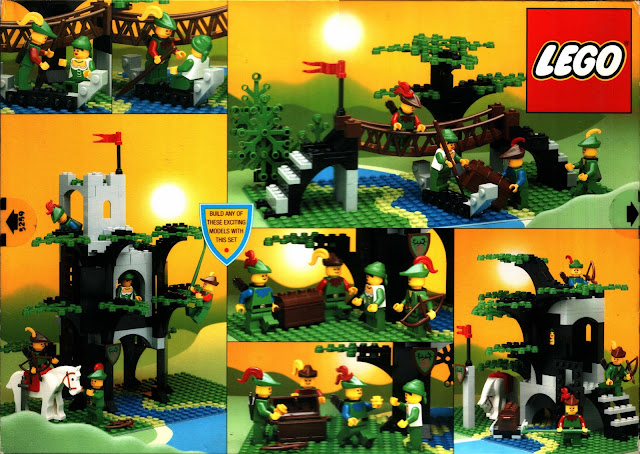 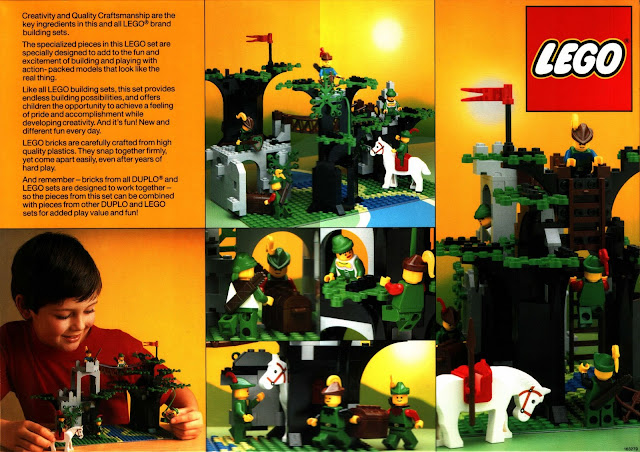 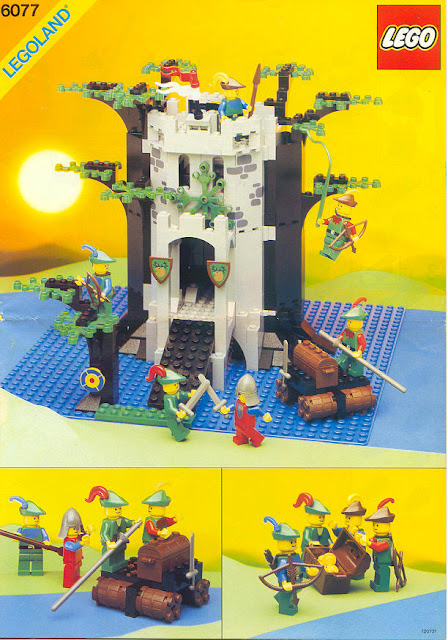 Finally we come to the largest of the Forestmen’s sets; their Fortress, I loved the way this set was fully enclosed and yet could be opened from the back and accessed, I also loved the small raft made of barrels and the little tree at the front with a target on it, plus you have to admire the bravery of the lone Crusader assaulting the fortress. Overall this is a nice set, I like that it’s on a blue baseplate, so that it feels like it’s on a river or surrounded by a moat (a reason to use boats for once) but the interior detail of the fortress is extremely lacking, there’s only a small platform for space and one little dungeon (submerged in the water), after that there is nothing else. A nice set, beautiful looking and full of figs, its just a shame these nothing to enjoy on the inside. 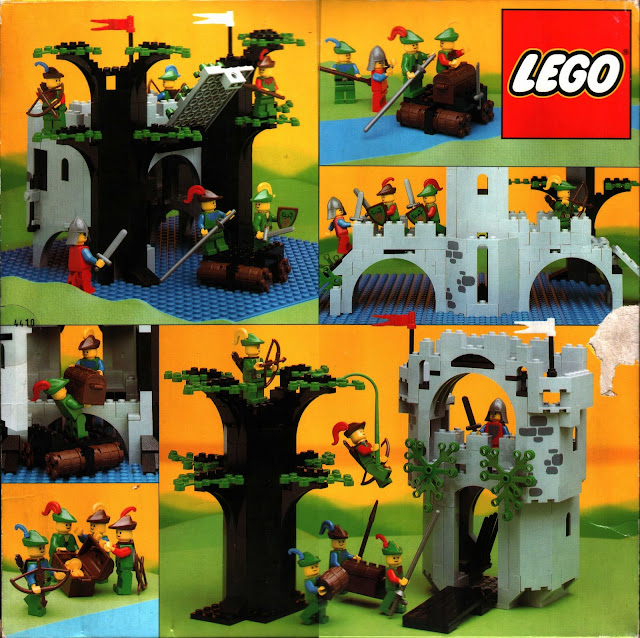 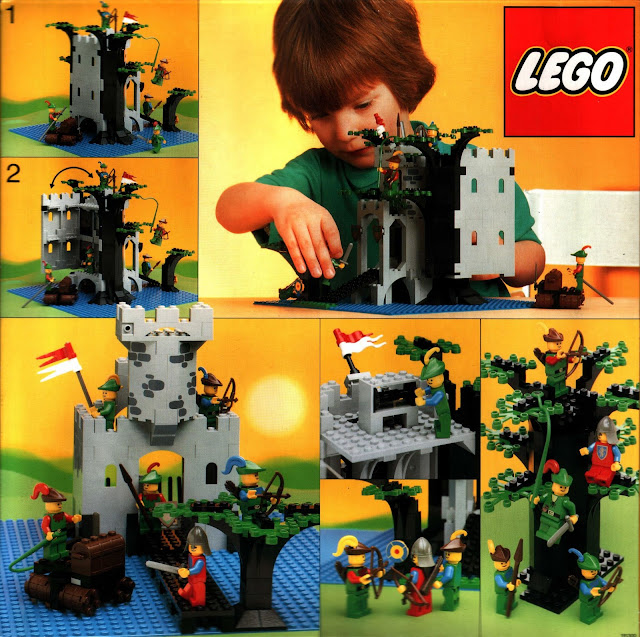 The Popularity of the Forestmen

I remember at the time (and since) that the Forestmen were always seen as one of the most popular factions. When looked at alongside, Crusaders, Falcon’s, Black Knights, Wolfpack, Dragon Masters, Dark Forest and Fright Knights; the Forestmen was always seen as the most unique and (on some levels) exciting. Each of the other factions had their own style, but others could never come as close to being quite so perfect as the Forestmen, I would hazard the argument that the Wolfpack had something, but sadly that faction was never fully developed (only three actual sets where released).

With a constant release of different styled castle soldiers (with helms, barding, armour and axes) a lot of the other factions became intermingled and combined (Black Knights and Dragon Masters, or Crusaders and Lion Knights, for example), the Forestmen where something completely different, you could argue that they were a 'Forest Faction' rather than a 'Castle Faction', this is still something unique today, over twenty years later.

Before you all jump up and say ‘what about Dark Forest?’ yes I know the Forestmen did see a small reinvention as Dark Forest, but those sets where never fully established (only three sets where released, surprisingly similar to the Wolfpack) and a lot of collectors I know fold those figs into their Forestmen collections. I see it as a small reincarnation (and not a good one) rather than a brand new style and faction.

I you need any more proof that this faction was seen as the most impressive of the early collections; simply go one bricklink and see how much more expensive these sets are to others during this time. Still not convinced? Well when the very first Minifigure Series was released, who was included in it? A Forestmen, yes that’s right, equipped with a bow, quiver and a soft green cloth cap. Is it the best faction ever? I really am no one to judge, but is it my favourite? Well that would be a yes. 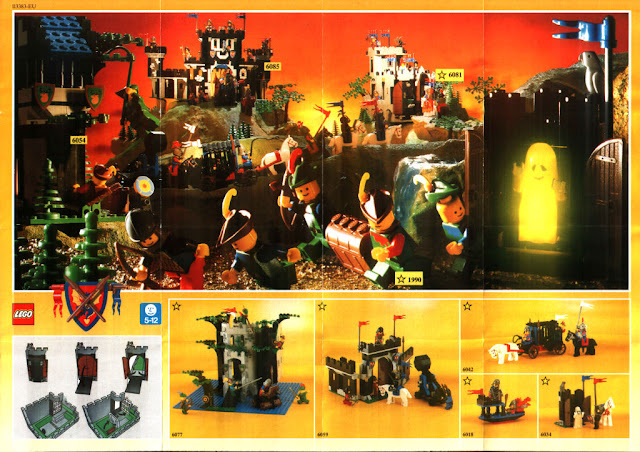 Sadly all good things must come to an end; and like the reign of the Forestmen themselves, this article too has finished. In the poster above you will see the next faction to be tackled by myself. Thank you for reading and I hope you enjoyed it.