By 1995 LEGO Castle had gone a few years delving into the darker side, glorifying factions devoted to Theft, Dragons or simply the colour Black (Black Knights if you missed that last reference). Really it had pushed itself to offer something new and exciting to the world of LEGO Castle, but as with all things it was time for a change; they needed something new, different, shinier; where did they go for inspiration? Did the invent Sky Castles or some interesting Steampunk knights? Well the short answer is no, they simply stopped looking at something new and reverted (like all profit conscious companies) to something familiar. 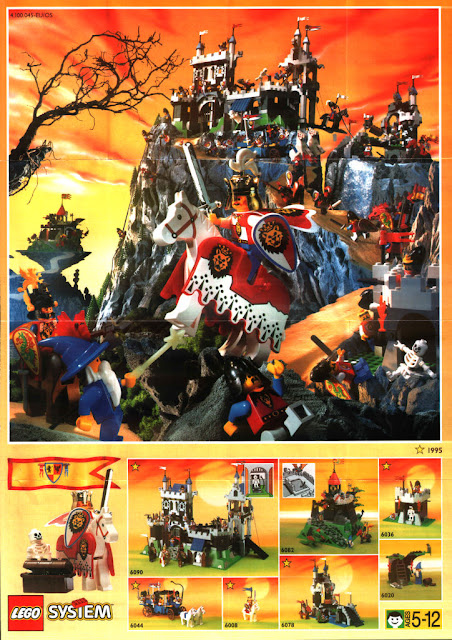 Royal Knights leans rather heavily on the Crusaders faction that came before it, they both share a number of common interests (the colour red and a fondness for lions being at the top of the list). But there was one inherent difference that made this faction stand out, can you guess it? Hint the clue is in the name. 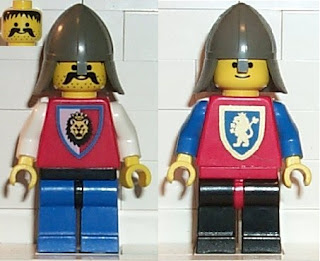 I was the fact that these guys actually got to have a King! Yes a new type of fig had entered the LEGO world, Royalty!

Now a fresh cheeked young child could use the King to boss around all the serfs and peons, he could climb to the tallest tower, wear his shiny crown, possibly sip from a jewel encrusted goblet and look down on his legions of minions whilst they march off to battle some distant bordering territory, each warrior fighting for his very life and dying in the mud for a uncaring King living in luxury miles away. 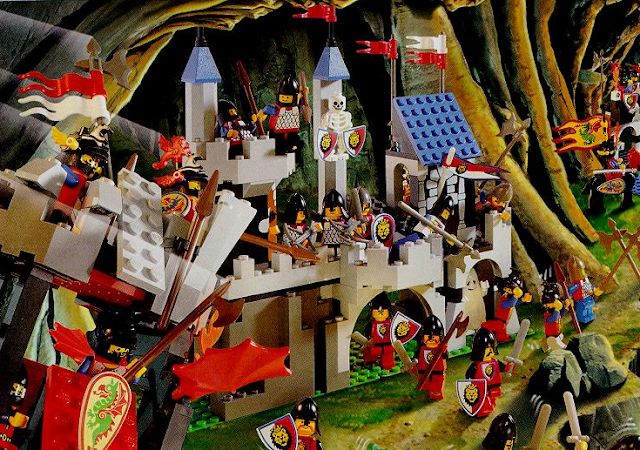 You thought the Dragon Master or Fright Knights were evil? Well those guys are nothing when compared to the power of a hereditary dictatorship, despite what the adverts said.

Sorry clearly I was getting a little side tracked there (personally I have nothing against Royalty, as long as they have nothing against me) but it’s interesting to think that LEGO Castle received a Dragon fig before it received a Crown head piece. Also new for this faction are the shiny sword and the skeleton minifigs; as for the Royal Knights themselves we see a large abundance of regular troops and an uncommon amount of Kings (Oddly) but as for the Knights themselves only two appear over the whole theme, the common inclusion of the oval shield is a welcome inclusion however. 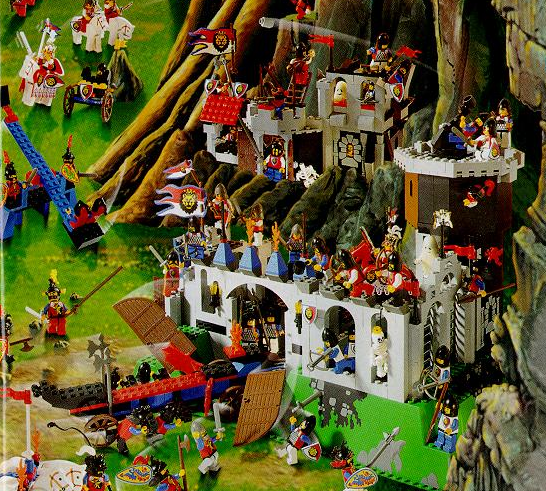 The Royal Knights faction was surprisingly small and yet was also seen as reasonably warlike (appearing as opposing factions for Dark Forest and Fright Knights whilst also fighting Dragon Masters in one of their own sets). Other than owning a large castle they had very little in the way of a navy or siege equipment, so it is possible to say this faction had some of the best masons but very little else. 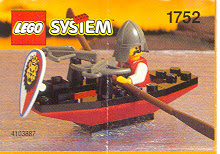 This set came in a box, a polybag and was repackaged in Japan alongside some sweets. Yet despite being so popular, I am not sold, the boat is tiny and the two crossbows unnecessary, we also see no other weapons and most infuriately of all, no quiver. I like the shield and I like that its fits really well with the drawbridge set but this set is far from one of my favourite impulse purchases. 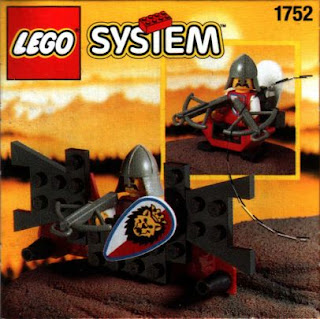 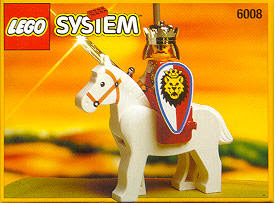 Possibly the stupidest name for a set ever (ever heard of an un-Royal King?) but I quite like it. LEGO was going out of its way to make exclusive figs (and parts) available; anyone could get a king without having to buy a huge set, this made it possible to buy four or five of these sets and give the crowns and sword pieces to each of your factions (then you could make some really cool warring nations, split families and royal intrigue). The best way I can describe it is to look at the collectable minifigs series, this has given us the option to get so many more interesting pieces for such a good price, the fact that they are on their six series (and have plans for two more) show just how successful that venture has been. 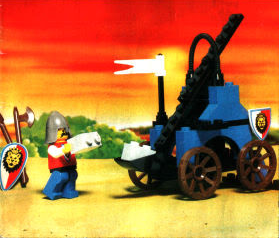 This set came along side a space ship so it is hard to judge it fairly as a castle collector is only getting half the actual LEGO goodness they pay for, it’s also US only which is very disappointing.

I like the set, it’s got some good accessories and is a nice sturdy build but it’s just not worth going to the trouble of getting it unless you like space too. One minor note this set is the only siege weapon available for the Royal Knights (on a side note the combined build is brilliant). 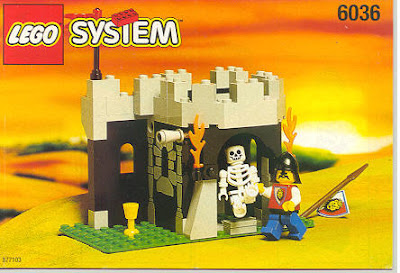 This set is a good example of the quaintness that was possible in LEGO sets, why has this lone guard been left in this spooky fort? Why is a skeleton occupying the lower floor? Why is there a mechanism in which said skeleton can swings down to unsuspecting trespassers to that lower floor?

It’s all a little eccentric but fun, the fort itself is sturdy and the parts it is made of are very useful for any Moc’er or someone wishing to expand their own castle. I like sets that have the potential to be used for other things and this set will go very well alone or as a guard house to a village or castle, if only the knight came with a sword rather than a spear I would give it top marks as a small set. 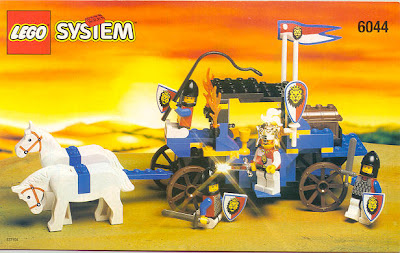 A King’s got to have a way to move around in luxury and he’s also got to be protected so on the fact that the set is carriage and that it contains a generous number of bodyguards (even if they are crusaders in disguise) the set wins points, I also an a huge fan of the cloth pennant, the two horses and the accessories (goblet and treasure for example).

However the carriage itself is a rather gaudy and blocky, its scale is also off with that of the castle and the blue, yellow, black colour scheme is horrible. It’s a real shame because I love everything about the set when you look at what it contains, but I just don’t like the build, this is a good example of how designs will always beat gimmick (which is why LEGO will always come out on top over Mega Blocks, P.S sorry for swearing). 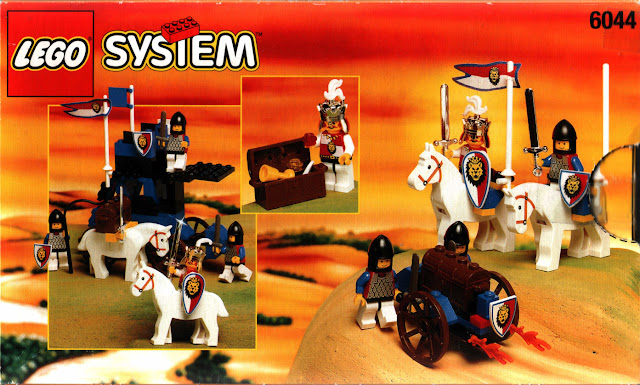 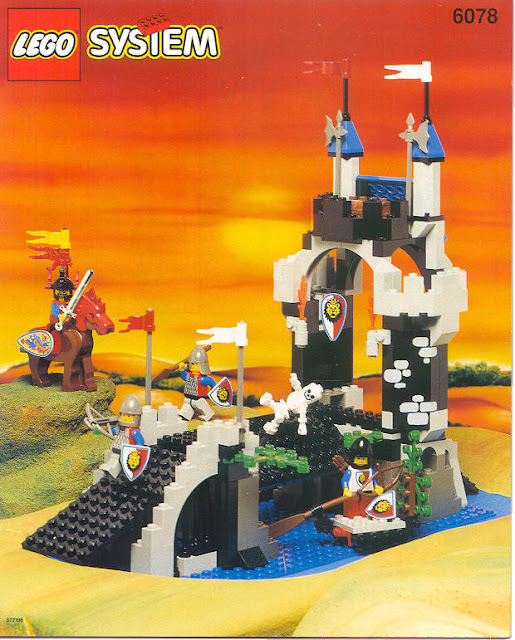 I see that more crusader figs have been ‘borrowed’ for this set, and it’s a little odd to see a Dragon Master considering the last sets to include that fig had released a year earlier (so effectively that theme had been discontinued).  As for the set itself I see something of a mixed bag, the design looks very nice but it’s made from too many large parts so it feels slightly juniorised, the trap is clever but the mechanism to hold it in place is not very sturdy so you have a problem of the bridge spinning when you don’t want it too and I like the inclusion of the raft but I just fail to see why it’s needed. I also miss the inclusion of some higher ranking Royal Knight, the guards look a bit feeble compared to the Dragon knight and as such I see an uneven battle ahead, we also fail to receive a quiver for the crossbow (ARRRRRR).

I like the set and it’s nice to get a proper bridge to span all those imaginary rivers in the LEGO world but I see it more as an average quality set rather than one of the highflyers that is remembered for years to come. 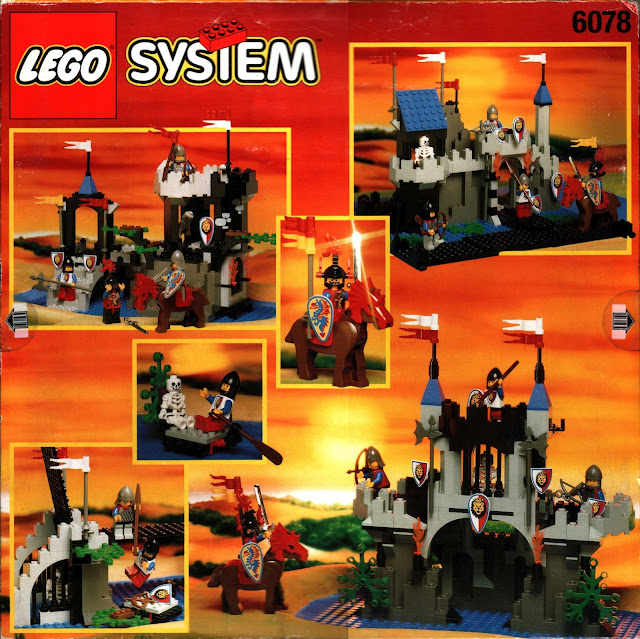 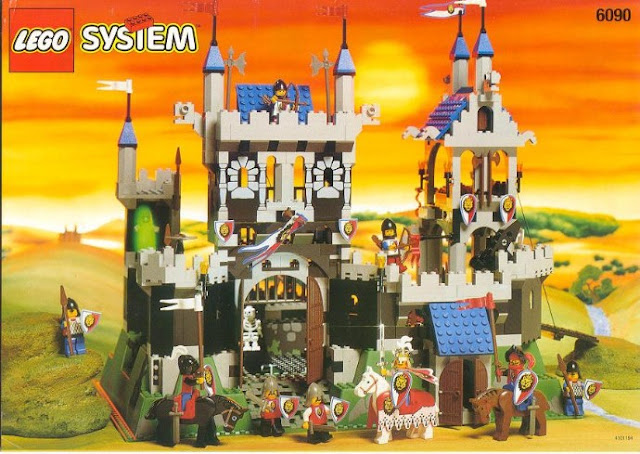 Now we come to the flagship set, the big one, the set that this ‘so called’ King states his claim to royalty on, The Royal Knights Castle. And what an impressive place for a King! It is one of the Largest Castles available and was defiantly the biggest set to appear up to this point for the castle theme.

So many parts of this set are unique, useful or exciting, the base plate, corner walls with windows, horses barding, large flag and King’s cape all cannot be found anywhere else (I think correct me if I am wrong).

Minifigs wise the set is also brilliant you receive a pleasant and varied number of troops, no longer are the figs only distinguished by their weaponry and helms but they also receive a slightly varied torso printing (white for archers, red for swordsmen and chainmail for spearmen). Three horses is a nice start to any Calvary and the inclusion of both a ghost and skeleton makes this castle the most haunted structure to date. It should also be noted that this set is the only example of Knights for the whole of the Royal Knights theme, I am really not a fan of the red gloved one as I feel he is touching a little too close to the jelly bean knights that came later (to be reviewed later also) but I can appreciate the inclusion of both of them in this set. 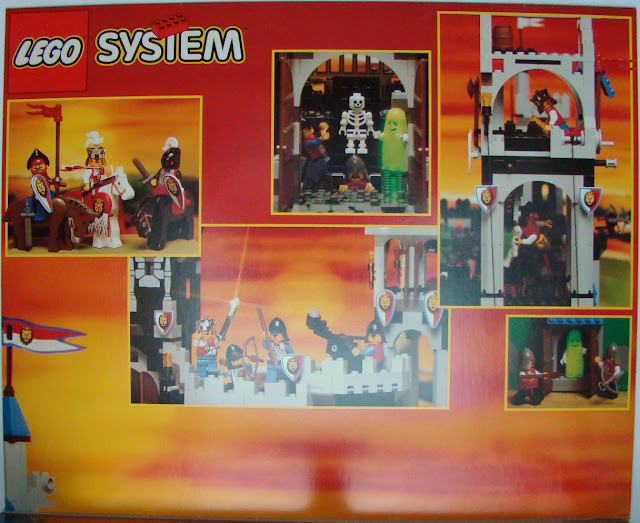 As for the design of the castle you can see that it is very appealing, the castle gates and portcullis are nice (though I would have liked the drawbridge at the front of the castle) and the splashes of grey offset the black nicely so that this castle look somewhat different to the Black Knights structures which also used a similar colour scheme. I am not the biggest fan of some of the gimmicks in this set, I don’t like that the King’s throne trap the pop up skeleton or the ugly technic catapult but these are minor quibbles to a great set.

Personally I see this set as one of the final greats alongside that of the Black Monarchs Castle, Forestmens Fortress and Black Falcon’s Fortress, something any diehard fan should build at least once (and preferably own forever). 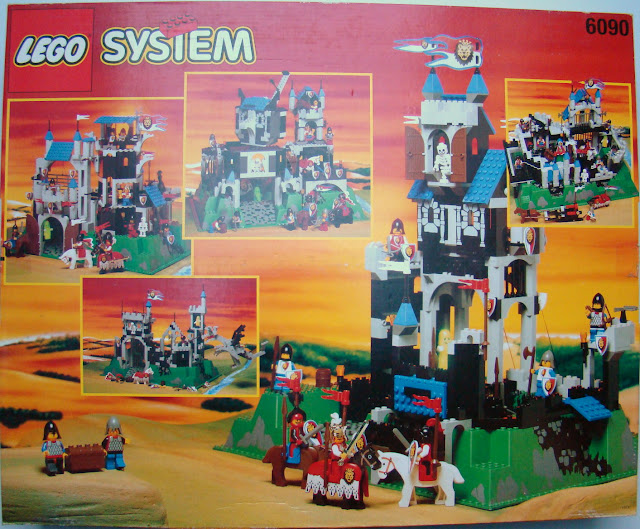 The one big question that arises with the Royal Knights is this, are they just the Crusaders repackaged in a slightly different formula?

That’s a hard one to answer, when I initially went back to look at my Royal Knights, I realised that the majority (meaning all) of them had been mixed in with the Crusaders, both Factions were aligned side by side defending each other’s castles, swapping gear, carrying each other’s banners and generally getting on like a pair of non-identically twins. This faction have a clearer motive running through them (do whatever the King says) were as the Crusaders where always a little harder to read in terms of motive and drive but looking at both themes I feel (to me personally) that the Royal Knights are always remembered as the 90’s Crusaders but that the Crusaders are always seen as the royal faction. Really to me both factions have become one.

So that leads me to my next question, is that a bad thing? Did LEGO waste time and resources simply making the same thing twice? Well to that I can say absolutely no; to think that the continuation of a good thing is a ‘waste of time’ is nonsense, to follow that train of logic there would be no need for a second year wave (or third year wave) for any theme ever. I see the Royal Knights simply as a further wave of Crusaders that took a little longer to come out, but with the inclusion of the Royal Castle, that wait was well worth it.

As always thank you very much for reading.

Next time I go back to LEGO Castles Roots (pun intended).
Posted by LegoSteve at 14:28