The Black Falcons were the second of two original factions release by TLG after the first wave (the second being Crusaders). Like the Crusaders they lasted for eight years though, they were a very small faction in comparison. Indeed over that entire period they only received seven sets of their own, but they did appear as the antagonist in many others.

In both Canada and Australia they were know as the Eagle Crests and a US catalogue from 1989 refers to “Forestmen”, “Black Knights” and “Guardians of the Grey Castle”, during this period no Crusaders Castle were being produced but the Black Falcon’s Fortress was. This can suggest that the faction could possibly be called “Guardians” and Black Falcon was actually a character who led them.

It should be noted that many of the sets featuring Black Flacon’s as antagonists against the Crusaders are present in my Crusaders article here, so if you wish to see them just click on the link. 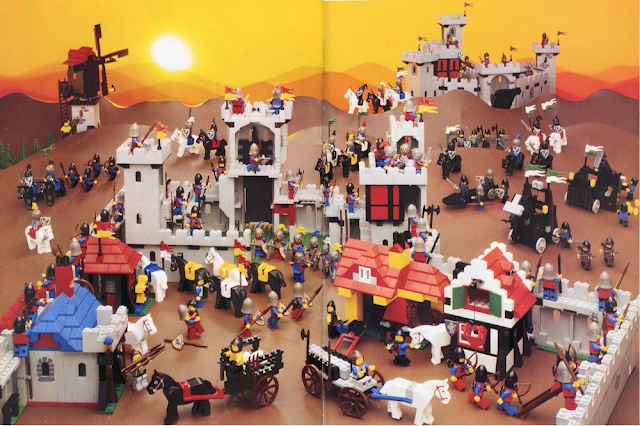 If only the Falcon’s lived in peace with Crusaders as pictured above; one final piece of Black Falcon info before we view the sets is that occasional a misprint would cause the beak or printing to be backwards, as shown in the picture below (the one on the right is rarest). 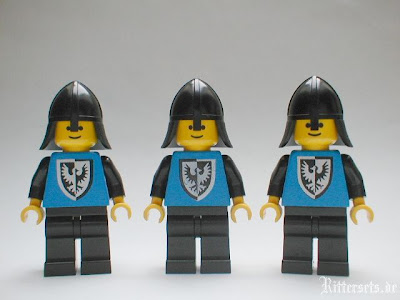 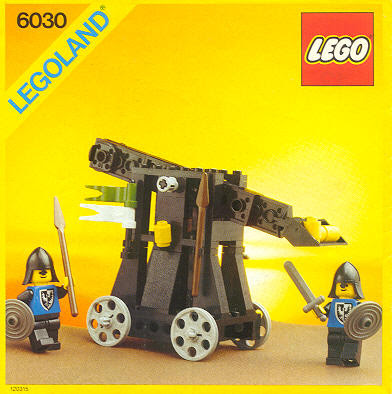 Here we see the first ever siege weapon released by TLG, oddly enough the set comes with the round shields despite the fact that the Falcon’s printed shield was released this year, and the wheels on the set are technic pieces rather than the wagon design (which was also released this year, 1984) so the set feels a little bit out of place. Overall though the size is very pleasing and quite similar to the historic version, place a couple of these against a castle and you have a nice little scene, plus the number of weapons and two figs make it a nice army builder. 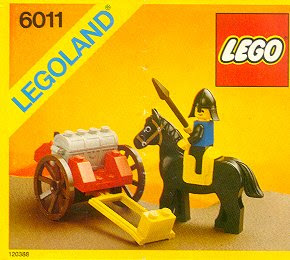 This set is special because it was the first set to be released with a chest and oddly enough the chest was a light grey colour (the first and only time) so possibly this is the rarest chest ever. The singular Falcon is sufficient to guard the chest because it comes with nothing in it, the yellow colour scheme on the saddle goes well with a yellow falcon shield, but sadly the set comes with out a shield, so it looks a little odd. Overall the set is a little sparse for this era but a good set to build some Falcon Cavalry with. 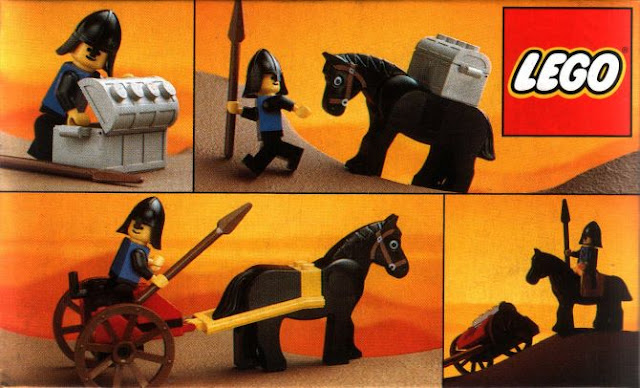 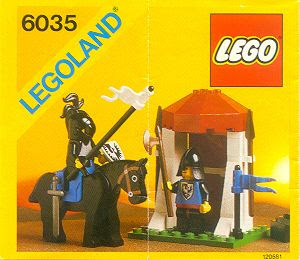 This set came rather later in the Falcon’s era and sadly it does not fit very well with much, the white and red is not a scheme used before and hence does not fit well outside any of the castles. Personally I saw it as an add-on pack for the Knight’s Challenge (1584) set (the jousting set with Crusaders and Black Knights). With the inclusion of this set you receive three Knights to joust against each other in the tournament, other than that; the biggest highlight of the set is the Black Feathers (which are quite rare). Is it possible, that with a Black Helm, Black Armour, Black Trousers and a Black Feather, that we are see the actual Black Falcon? I will let you decide. 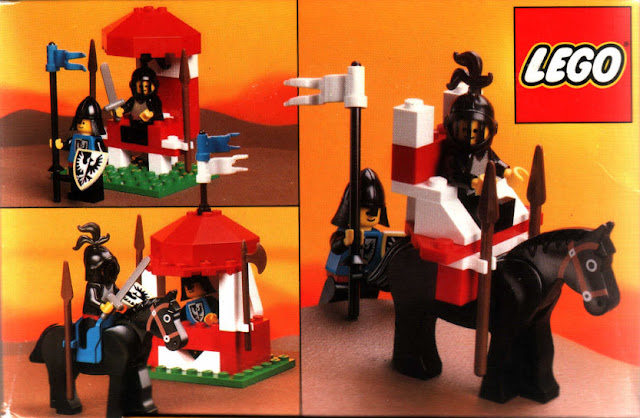 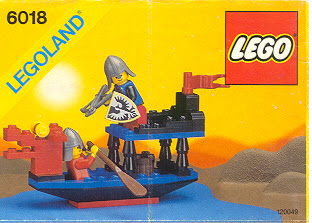 It was never made clear if this set was a Falcon set or not, the figs do not have the Falcon printing (just the regular chainmail) and they wear grey helms but they do have a single shield, so the question remains open, personally I would say no, but feel it's inclusion is important because of the shield. As well as the confusion, the set also receives very little in the way of weapons a single crossbow which sadly comes with no quiver (very cheep of LEGO); the only real highlights are the oars (rather new at the time) and a barrel (for the same reason). 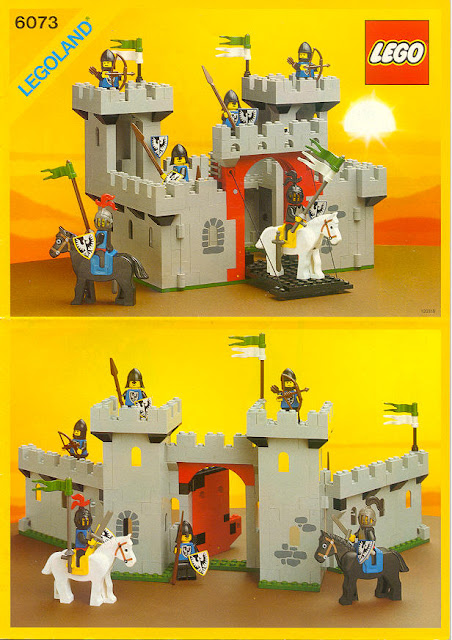 Alongside the King’s Castle for the Crusaders, this set was the first castle to be released after the yellow one from the Classic’s era. Though sparsely furnished the design is rather engaging and has the beautiful ability to be opened, so that it can be one contained castle, or a long front castle wall. The set is built on a number of green plates and features a winch for the drawbridge and a small prison with a brick built black door. The generous number of Minifigs for such a small set and the high number of weapons and shields keep this castle ranked highly in my personal list; it also goes very well with their second fortress (shown below). 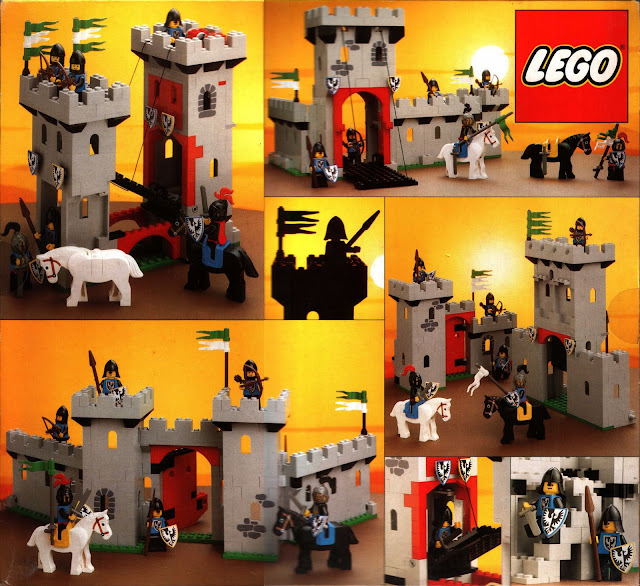 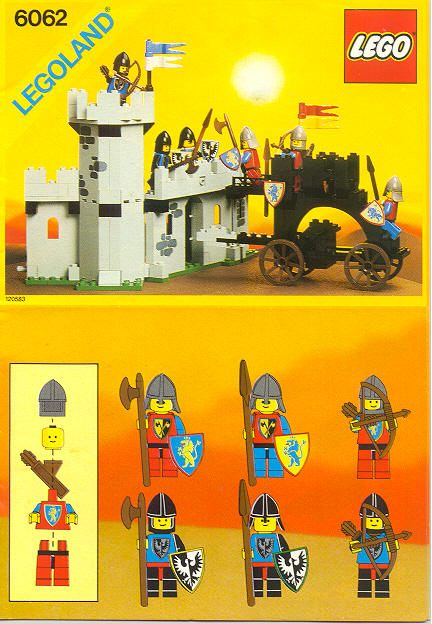 This set is unique because we see the Falcon’s defending an area rather than attacking, again a generous number of figures and the ability to fold the castle wall up (or connect it to another structure) makes this set rank highly. The siege engine is also very nice and gives the crusaders something to use, overall a very good set. 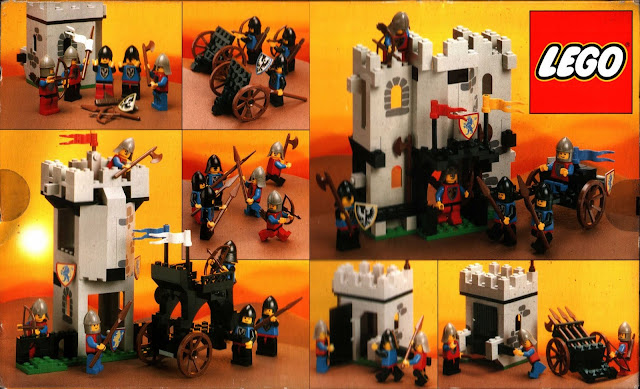 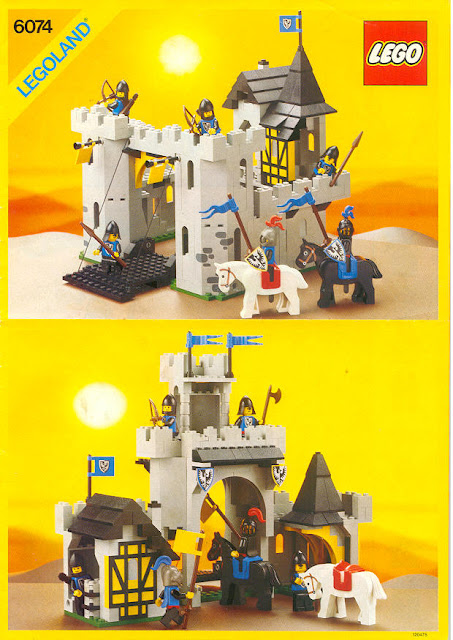 The second Falcon castle, this set is a lot more aesthetically pleasing than the first, The small yellow structure at the back (possibly a chapel) is a nice counter to the grey of the walls, the yellow flags on the front also help tie this image together. Unique to this set is the small blue flag with the Falcon’s symbol upon it, whilst the yellow timber frame was first seen here (and only used once after this). The only criticism I would give to this set is the lack of shields, the previous castle was very generous but with this set less so. Overall that is a minor complaint and the set was so popular it was re-released in the Legends series in 2002, proving its high quality (on a minor note, in 1986 both this set and the Guarded Inn were build and then released as Legends sets, 1986 was a good year for castle). 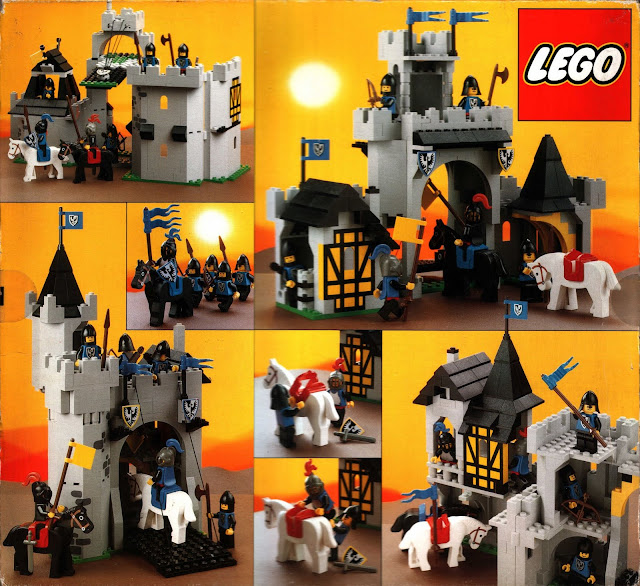 Other Sets to be Viewed Later

These two sets below will be reviewed once I tackle the Black Knights but as they include Falcon’s they need a small mention here two.

Knight’s Stronghold 6059
This set includes the only Black Falcon armed with a crossbow (except for the weird Battle Dragon boat set), whilst the second Falcon is the only one ever to receive a vizored helm and chest plate armour piece, so he could possibly be the fabled Black Falcon Leader, we also see the second siege engine for the faction. 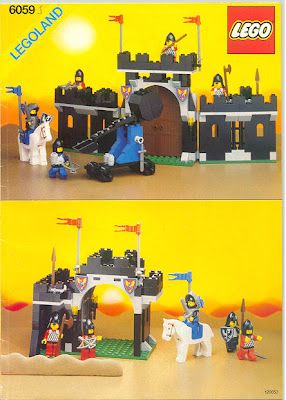 Sea Serpent 6057
The Falcon’s in this set are merely antagonists and the only thing to really note here is the unusual grey helm on the archer and the grey trousers on both of them (possibly the uniform was greying with age?). As these were the last Falcon’s to be realised (ever) they could be the final warriors fleeing the land and being harassed as they go by the Black Knights Fleet. 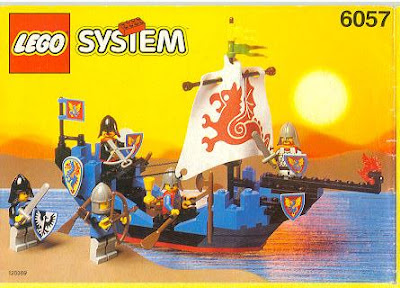 The Connectivity of the Older Sets
One reason why these sets are looked back on with such fondness by those who remember was the fact that many of the sets connect together; this helped the collector feel like they were building towards a mighty fortress or perfect village. With every purchase you where not just building your collection but your actual structure. Below is an example of a few combined sets. 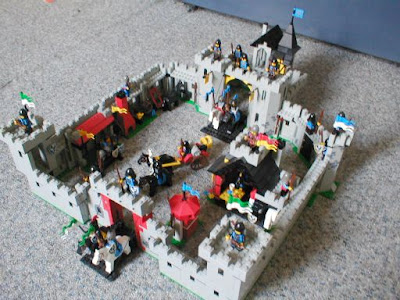 As you can see the structure is very impressive, which is something you simply could not buy nowadays, if only modern sets would take a look at the past.

Though the Falcon’s never received a maiden to protect, a leader to lead or even the largest of back stories, I personally like them the most out of the six none outlaw factions in the old wave (Crusaders, Black Falcons, Black Knights, Dragon Knights, Lion Knights and Fright Knights). This was possibly due to the fact that I saw them as the underdog, not strong enough to own a huge castle or an array of siege equipment but also not cool enough to live in a forest or wear only soft hoods and steal from others (Forestmen and Wolfpack reference for those who didn’t get that) they were the middle faction one often over looked and mocked by the mighty Cruaders and Black Knights or the truly unique like the Forestmen or Wolfpack. This appeals to me, if I was a Lego figure I would be a weak generic and often over looked Falcon. 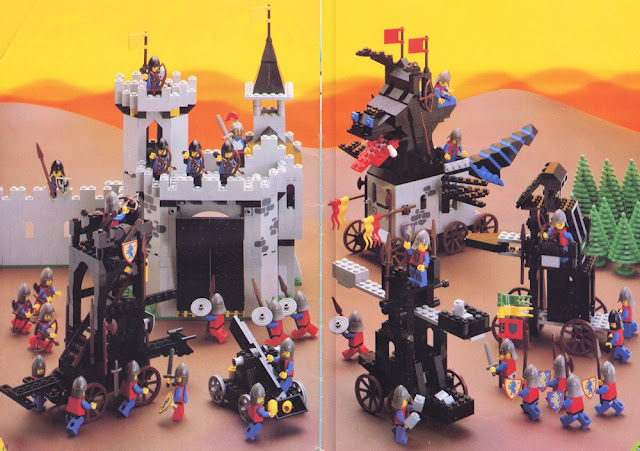 Here is a hint of what’s next. 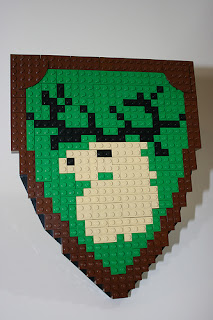