The History Of Lego Pirates

LEGO Pirates was a LEGO theme introduced in 1989.

It was the first completely new theme that appeared after the three initially introduced main themes by LEGO (which are Town, Castle and Space, introduced in 1978)

It focused on the idea of Caribbean pirate’s fighting against soldiers of colonial empires (the Imperial Soldiers in blue and the Imperial Guard in red) and they would occasionally encounter indigenous people, called the Islanders. During its initial run from 1989 to 1997, the theme saw continuous releases in every year except in 1990. While the pirate faction remained largely unchanged, their imperial adversaries were subject to various visual changes.

The theme was the first to feature LEGO versions of firearms, in the form of a pistol, musket and cannon it also introduced the first Minifigures without the standard smiley-faces as well as specific elements for the construction of large sailing ship models and the inclusion of both the parrot and monkey fig; all contributed towards the outstanding reception recieved of Pirates.

Following a long hiatus starting in 1997, except for occasional rereleases of old sets under the title Legends, the theme was reintroduced in 2009, combining the established look from the past with recent LEGO elements and building styles.

A picture from 1989 showing a clash of two factions. 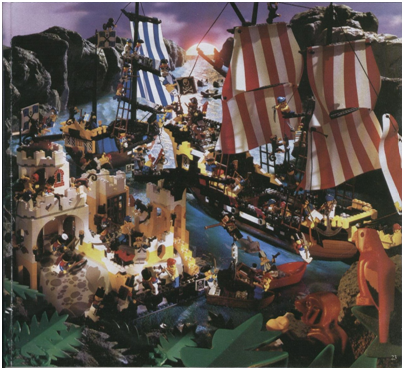 Lego Pirates initial release was between 1989 and 1997, in this time four factions were released in what I like to call waves.

Between 1989 and 1991 two factions were introduced for the Pirate Theme, they consisted of Pirates and the Blue Imperial Soldiers.

Many see this as the most exciting wave, this could be due to the fact that it was the first wave, but many old school lego collectors claim that this wave released the best set in the form of the Black Sea Barracuda (a ship for the pirates to sail), Eldorado Fortress (a beautiful base for the Imperial's to stay in) and the Carribian Clipper (this is the ship the bluies got to fight in).

The Four pirate Minifigs where released at the time
The Captain, two of his crewmen and a Wench.

The two crew members came in many forms, the one with the bandana would have various trouser colours, a blue or red bandana and a red or blue stripped shirt, the pirate with the eyepatch could have either a brown or black tricorn (the three corner hat he is wearing) and various coloured trousers. The one with the eyepatch was called called Rummy and the other was called Flashfork (from the comics, which also named the parrot and monkey as Popsy and Spinoza).

The Captian would never change his apperance and the wench would swap between a red or blue bandana.
The Captain was called, Captian Roger Redbeard ( possibly Captian Roger) whilst the Wench as called Anne.

Their Adversaries of the time where the Imperial Soldiers, they sailed the seas with their Carribian Clipper and went to their Eldorado Fortress whenever they needed some land under their fett. Four Minifigs where released with this faction. These Figures included the Commander (called Governor Broadside), his Lieutenant (called Lieutenant Martinez) and the basic Soldier and the basic sailor.

As you might have noticed the basic body on the Lieutenant, soldier and sailor are all the same, still if they are to represent an army then uniformity is important.

This wave saw a whole new faction in the form of Red Imperial Soldiers (called the Imperial Guard), old pirates from the orignal wave were still released in set at this time, but sadly no more blue soldiers were released at all. The red soldiers where exactly the same as there blue counterparts but had the added bonus of being red not blue. Notable sets in this wave include the Imperial Trading Post and Skull Eyes Schooner, and the first ever imperial flagship (the ship the red guys got to fight in, a second flagship was released in 2010).

Three new pirates were included one of which looks very similar to an earlier one, just with brown hair not black, whilst the other two have very similar faces (though the torso's look nice).

The Minifig on the left (the one in the brown shirt) is seen as the rarest of all minifigs, he was only ever released in two set, the Imperial Trading Post and Skull Eyes Schooner, in the trading post he has his own ship, which is believed as many to be a trading or merchant ship (the only one released by LEGO) in the Skull Eyes Schooner he is just a pirate crew member. He is also apparently called Steve, but I have no idea where the source came from.

The minifig in the middle was seen as an additional pirate fig, he would come with various trousers and a choice of blue or red bandanas and occasionally a tricorn hat, his shirt is also black and red striped not white and red, making his torso slightly different to the previous pirates.

The Pirate with the ripped shirt, is often seen as either a new design for the Captian (shown above) or as a whole new pirate in his own right. This debate was finally put to rest when the two minifigs where released together in the Red Beard Runner (a pirate ship from the fourth wave), it should also be noted that this pirate has brown hair, whilst the orignal captian was released with red hair. This Captian was also realsed with his own infearior ship (the Renegade Runner ) he was also given a name, Ironhook. 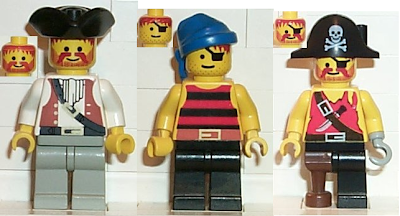 Their Adversaries this time came in the form of the Imperial Guard (very little change you might have noticed), only three Minifigs were released with this faction. These Figures included the Commander (called Admiral Woodhouse), a Lieutenant (with no name) and the basic Soldier, they fought the pirates from their flagship and stocked up on supplies at there trading post. 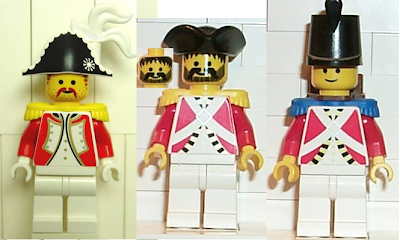 This wave saw a whole new faction in known as the Islanders, these guys were, brand new and looked nothing like the pirate sets from before, during this time a small number of Red Soldier Sets were also released but the red guy never went up against the islander and vice versa, the actual pirate faction still had the main focus. Notable set in this wave was the Enchanted Island.

No new pirates where designed during these years, but all the older ones where still in circulation.

The Islander also included the second female in the theme, known as the Islander Girl (or possibly Princess Uhu, though that might not be true), the man in the red mask was the leader of the tribe and his name was King Kahuka.
Islander figs never had a big ship to go up against the Pirates so this faction is often seen as the most peaceful of all the factions released. 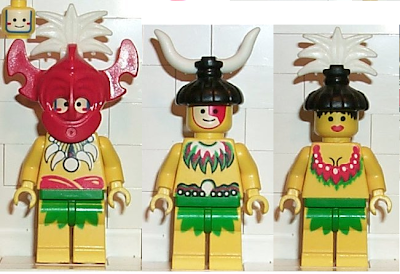 Sadly this was the final wave until LEGO rereleased the Pirate Theme in 2009, this wave saw some odd sets and the smallest (and worst, in most peoples opinion) pirate ship ever called the cross bone clipper, also during this time the Islander and Red Coat sets where phased out. However one plus point to this was the new pirates and new faction released.

The new faction in this wave was called the Armada, this group only had 2 actual set realised for them (a tiny outpost with 1 minifig and a small/medium sized ship with 3 minifig), they also included a few Armada minifigs to go up against the pirates in the sets released during this time.

Pirates now had a nice new look with completely new faces and torsos.

The pirate on the left came with a variety of trouser colours and either a blue, red or black bandana (the rarest and most exciting bandana), he is also seen as the second rarest pirate avaliable.

The Pirate in the middle came with either a brown or black tricorn and oddly enought a peg leg or normal leg.


The final pirate is often seen as the third captian varient, he came with a captians hat (and white feather) in one set, again his trousers would change colour and he would come with either a black or brown tricorn. 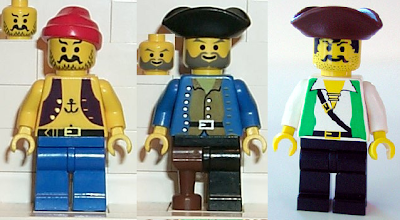 The Armada minfigs also had a very nice selection﻿ which included a green and red Captian with a beautiful silver chest plate (please note that the picture of the green guys is without a chestplate however he did come with one in set 6280) and one type of soldier. please note I have included a picture of the captians with and without there armour, just so you can see their torsos.
It is often seen that the green captian is the leading officer due to the fact that the basic soldier is in red (meaning the lower orders wear red whilst the leader wears green).

Wave 5 Overview (2009 -2010)
The new pirates have arrived, a lot of old school LEGO collectors dislike the new style because they don’t fully fit into the old theme, but I say progression is the way of life and fully embrace the new pirates and their foes.

This wave saw the new pirates against the third faction released (the red soldiers), both teams had a nice overhaul. This wave also released the best ship ever (in my humble opinion) know as the Imperial Flagship (the second one), it costs quite a bit but is well worth the price to finally see the Imperial guys have the best ship, sadly though this ship is one of the only highlights of the wave, with other sets missing baseplates and seeing lower quality sails.

Pirates now had a new Captain (by the name Brickbeard), new wench and 4 new torso type, there is also a great number of new heads available which makes also each minifig unique in some small way, below is a picture of as many variations as I could find. As you can see there is some similarities from the old style but also some new ideas mixed in. 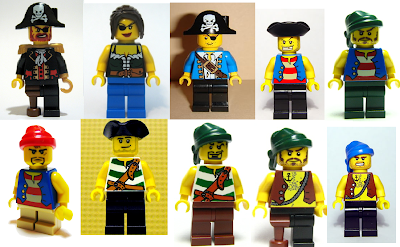 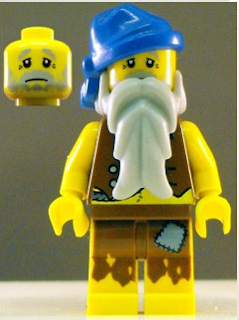 The Soldiers also have an upgrade; the commander has gone back to being called Governor, though his uniform has changed from red to blue, he now has two daughters available to rescue (though the one in the blue dress is called the captians daughter and is safe aboard the Imperial Flagship, the one in the white dress is refered to as the Admiral's daughter and is in need of desperate help aboard the dirty brickbeards bounty) . Whilst the basic soldiers have been improved with new face variants (sadly only one torso style still) and a print on the top of their shako (tall black hat), Officers now have a feathers in their tricorn’s (other hat shown) as well, sadly there is now no backpack anymore, just a back printing which is not as good. On a special note, sets from this era featured shooting cannons in all countries, where as sets from the previous era's acually featured non firing cannons in the US.

Below we have the Governor, his daughters and then the Officers and Soldiers 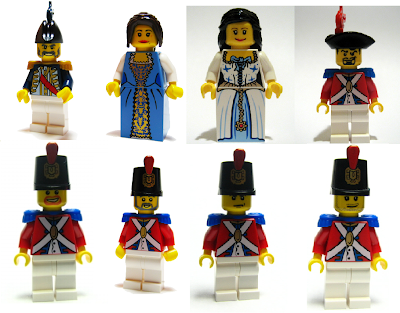 Well as you can see these are the themes that where once available to the LEGO pirates, sadly now none of these are available anymore, in fact only the Imperial Flagship released in 2010 is available to buy from the actual LEGO store.

The new pirates are already going and the new red Soldiers only have one ship left available to buy.

But the future of LEGO pirates will see this theme go in a whole new direction.

Pirates of the Caribbean (the fourth Movie)

We will see how that turns out.