By 1996 most of us had existed for over half a decade without any variation within the Castle world, it was just an repetitive, endless stream of troopers in helms marching around in castles, sure some of those castles had kings and others had Dragons, some had blue bricks as a minor colour, some had red, but except for a small faction who liked to steal (the Wolfpack) LEGO had stagnated. 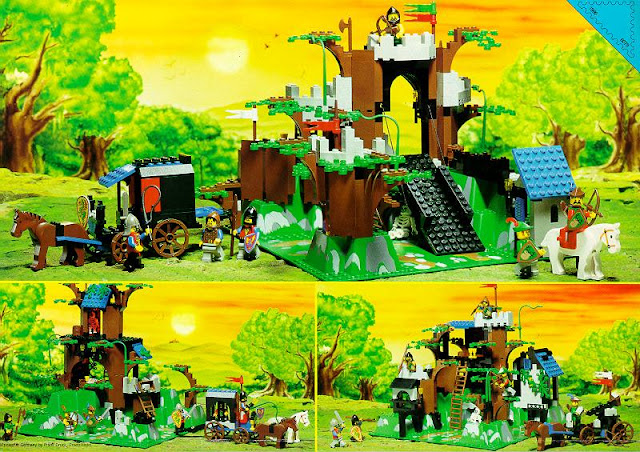 Then some bright spark in the design department (with large slightly unfocused eyes and a tendency to bark like a dog at the admin clerks) had an idea; that idea was to “create a cool new faction centred around forests, with a sort of Robin Hood vibe, they could use bows and wear caps of green and brown, yeah it would be great, yeah”

Everyone around the design table gave a shy sort of half smile some even nodded, no one wanted to tell this ‘special guy’ that it had been done already. Out of pity this man was encouraged to go ahead and start designing some sets, then everything started snowballing and the bright fellow was given  permission to proceed with the plan, money was invested, lots of money.

Out of shear desperation and a hope that the public wouldn’t get suspicious, the word ‘Dark’ was added to the front of the faction title and what was to follow was the joint smallest faction ever to grace out toy store shelves.

The Dark Forest, not to be fooled with the Forestmen sets from the late 80’s or the Wolfpack from the early 90’s, this theme was 'dark' like the latter, yet came from a 'forest' like the former. All joking aside I can understand why LEGO would revisit a very successful older theme but I am always a little disappointed when they do because the new sets are never as good as the old ones and I would prefer they spend their time investing in new things, a good example of this is the ninja theme and western theme both of those are examples of LEGO trying something new rather than sticking with the familiar. As you can see the new Dark Forest was very familiar. 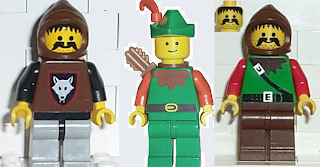 As for the faction themselves we see one of the most warlike groups ever to grace the LEGO world, tackling Dragon Masters, Royal Knights and Fright Knights these guys made a lot of enemies. Points in their favour come in the form of some new and interesting torso prints and the inclusion of the brown brick for the tree parts rather than black. Points against them come in the form of a repetition from the Forestmens theme (including the exact same shield) and a lack of sets. However compared to a lot of what was available at the time these guys look much better, watch this advert and see if you can see the Dark Forest set at all.

Its like their not even trying to advertise the Dark Forest, anyway onto the sets. 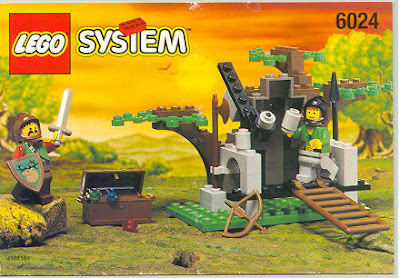 The smallest set available would have fitted perfectly alongside the Forestmen sets from the 80s. If viewed from the front this sets looks like a rock with some twigs growing out of it, however turn it around we get this awesome little hideout complete with catapult, chest and a completely unnecessary ladder. I like the huge amount of weapons (though I would rather the spear be brown not black, but hey you gotta get that ‘dark in there somewhere) and I like the fact that for such a small number of bricks you can do a lot with the set, My only real gripe is why include gems with the chest, yes I understand that treasure in chest is something LEGO always do but it feels so out of place here, why would outlaws living in the forest have gems? Overall its one of my favourite smaller sets as it is so useful anywhere. 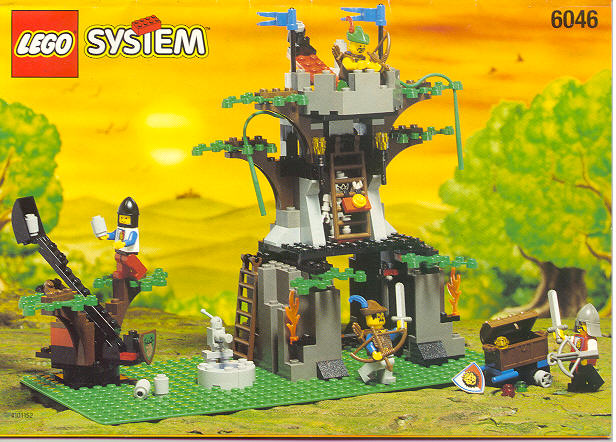 This set is another classic example of LEGO getting the set name wrong; to call this small tower a stronghold would be laughable, however that is not to say the set isn’t good, no a set cannot be judged by name alone. However when you look at design that is when a set can be deemed ‘bad’, so is this set bad? Well in my opinion yes and no, but mostly yes.

The set lack cohesion it is clearly divided into three parts and yet none of the parts really connect together or complement each other, it also lack quality as the tower itself is very poorly built and despite the bottom half being a hideout and the middle part being a jail neither of them really look like they are filling the roles assigned them. As for the large catapult I like its design but don’t like its inclusion in the set I would much rather they invest the bricks in building us a tree or small river to make the baseplate seem more worthy, as there is a lot of spare space in this build and we already get a catapult at the top of the tower, two is just overkill.

Thematically the set is a letdown as well, why are the Royal Knights attacking with a chest of gold? Why is one of them using the catapult on the other? Why is there a stone fountain in the middle of the forest? It’s all a bit of a mess.

Good parts about this set come in the form of the minifigs and the design of the water fountain in the middle however that is not enough to lift it up from the mediocrity it is wallowing in. 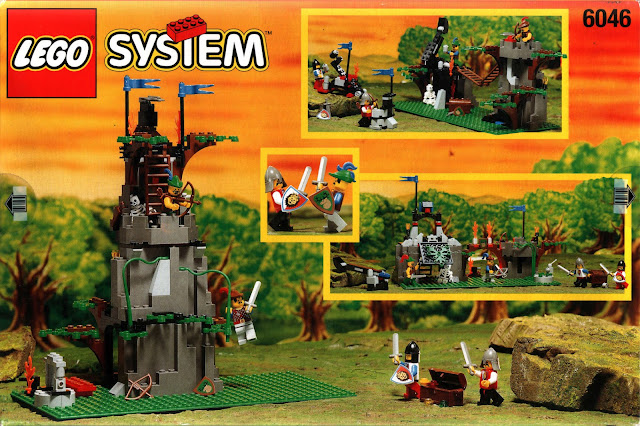 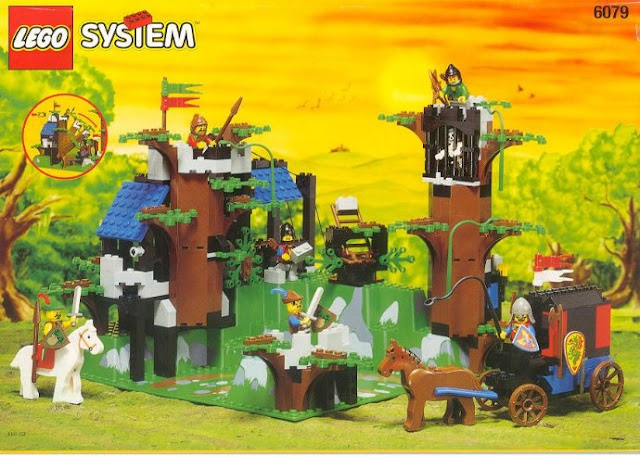 It is funny that I could have two such opposing views on two sets from the same theme, but as strongly as I dislike Hemlock Stronghold, I strongly approve of the Dark Forest Fortress. This set is really good because of one thing, theme, it focuses on telling a story and improving the LEGO world, it has its flaws but the fact that the set is so engaging thematically means it will always be on my top ten list.

The story it is telling is of an ambush in the forests, we get two nice tall trees, a wonderfully designed baseplate (first seen in blue for the pirates Enchanted Island set) and a very well designed carriage, these elements alone make the set interesting.

For those who love gimmicks we also get plenty to do, firing catapults, collapsing trees, raising drawbridges and exploring hidden compartments. We get a generous number of items and weapons (three golden goblets and printed map being the highlights) and a decent number of figs including (but not limited to) all the new Forestmen and two horses. 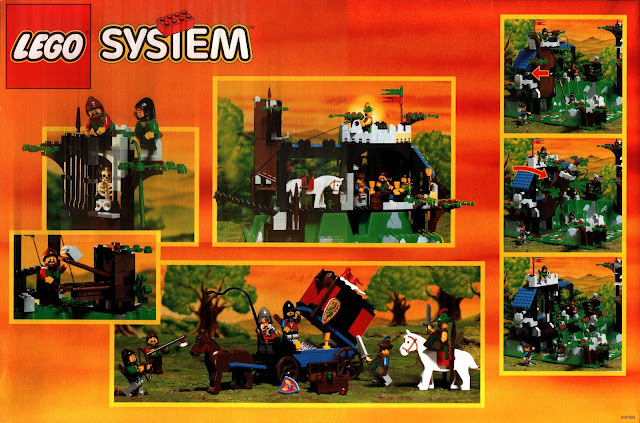 As for the overall design I like how it feels, it is like a forest that has been adapted by its occupants, it feels like the outlaws have collected what parts they could and have tried to create some form of shelter using the very landscape around them.

Once, some parts of this set slightly annoyed me, I didn’t like the Black Knights shield, the grey helm or the annoying little jail built into the tree but now I see those things as quirky, odd and fun. Sure it doesn't make the greatest amount of sense but the set is a good example of solid LEGO design, its fun, it looks nice and it’s quite unique.

If you’re after something a little different this is for you, however it’s quite rare and fairly expensive so I would advise this one only for a truly fanatical collector unless you see it cheap somewhere, however once bought I doubt you will be disappointed. 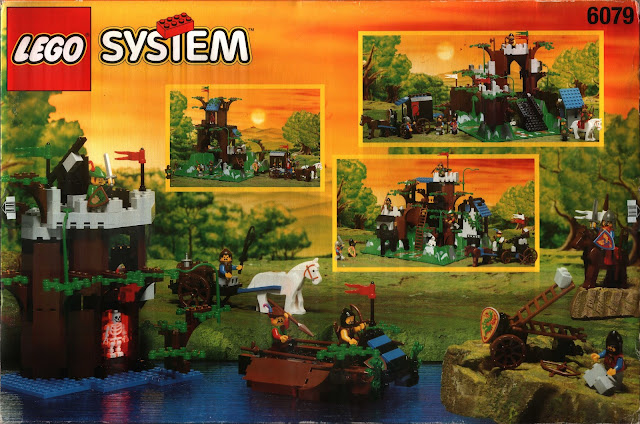 Burnt Out and Faded Away

As with the Wolfpack faction these guys only got three sets, yet they are mostly forgotten about whereas the Wolfpack are still referenced today on must LEGO sites (Eurobricks in particular).

This is an interesting phenomenon which I believe is due to the fact that these guys were a repeat; they were simply ‘Forestmen Diet’ they had none of the originality of that kept the Wolfpack so popular and due to the fact that all these sets where released in a limited number for a limited time, means that they never had a chance of becoming ingrained in our collective psyche.

This is a shame because the sets were (mostly) great and I think if most collectors now were offered them at a reasonable price they would jump at the chance. The Dark Forest are like the b-sides to any music album, they aren’t the reason you love the band and they aren’t as good as their hits but by owning them you are listing to something few people get to experience and you are experiencing more of the band than other fans, you are blessed by its very own elitisms.

Is that good or bad? I can’t tell.

As always thank you so much for reading.

Until next time (when we get a little spooky) Cheers.